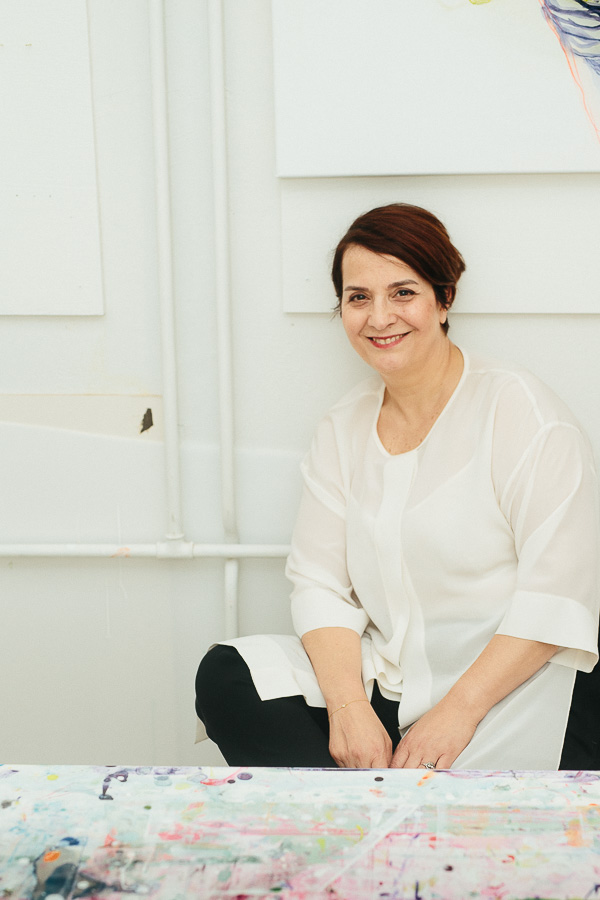 Melek Mazici (born November 25, 1956 in Istanbul, Turkey) is a visual artist living and working in Finland since 1981, initially settling in Turku, and later making Helsinki her hometown. Combining both Finnish and Turkish culture has become a way of life as well as a strong source of artistic inspiration. She has also worked in London, Stockholm, Paris, Brussels and New York.

Mazici has made an artistically and geographically long way from her home town Istanbul to Finland. Nevertheless, as an artist, she is a true cosmopolitan. At the heart of her artwork, there are organic shapes and transparency of mind, which give the viewers the opportunity to mirror their own experiences and emotions.

Mazici describes herself as an aesthete. Even though organic shapes, such as flowers and landscapes, have always inspired Melek Mazici, during her decades-long artistic career, her artistic style has lived and developed through different countries, landscapes and landscapes of mind. In her latest work, she wants to view nature as a whole. This is reflected on canvas as abstract images and as a harmonious combination of shapes.

In her latest work, Mazici in a way returns to the Istanbul of her youth: the rich spectrum of colours and bright light. The paintings are, however, simplistic, which is always characteristic of Mazici’s artwork. Typically, her work seizes the moment of the artist’s experience, which also speaks to the viewer. “The image and I work in co-operation”, Melek Mazici describes her technique. At the same time, the viewer is included in this creative process, as a part of the artwork.

In Mazici’s artwork, the viewer can also perceive feminine dimensions, images originated in the borderlands between sleep and wakefulness or layers of mind, between transparency and opacity. Mazici’s artwork takes many paths and communicates with the viewer. In the end, all her work originates from direct, honest and touching beauty.

Since the year 1980, Mazici has had regular solo exhibitions and has participated in numerous group exhibitions in Finland and abroad in Turkey, the United States, France, Japan, Germany and Ireland. Her artwork is also featured in private and public collections around the world. In Finland, her work is included in the Finnish National Gallery, the Helsinki City Art Museum and the Pori Art Museum collections. In Turkey, Mazici’s work is displayed at the Galeri Nev gallery, and has also been acquired in significant private collections.

Melek Mazici is a two-time recipient (2000, 2010) of the five-year Finnish State Grant for Artists. In 2014, Transparency, a book detailing Melek Mazici’s artwork, received an award recognizing it as one of the most beautiful Finnish books.